A moving documentary about Marc's personal experience that horrible day [ 9/11 ] and how that led him to writing the tribute song "Stronger" as a way to deal with the sadness and trauma. 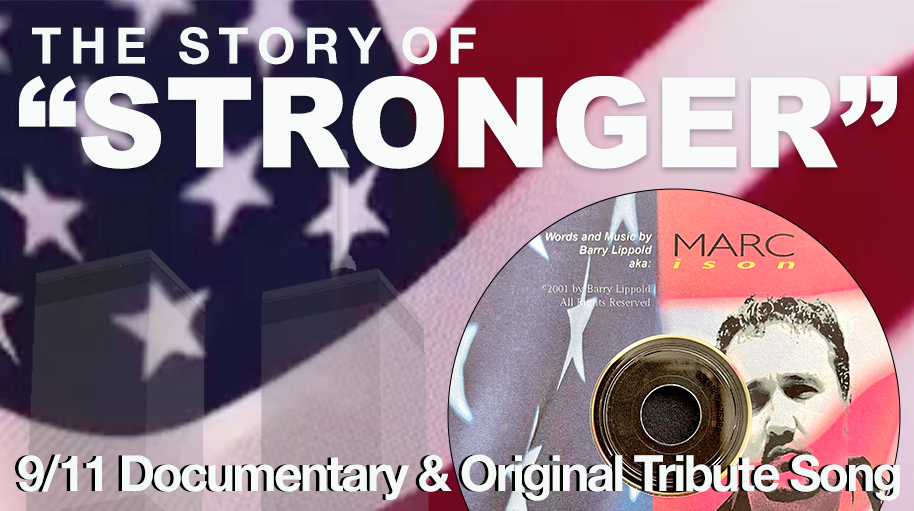 About "The Story of Stronger"

"The Story of Stronger" is a 20th Anniversary Tribute & Documentary about Marc Ison's personal experiences during and after the Twin Towers disaster on September 11, 2001 [ 9/11 ]. This documentary tells the story of how Marc came to write the song "Stronger" as a way of dealing with the tragedy and trauma of that day. Marc lived across from the World Trade Center and had an appointment in the North Tower [WTC1] at 8:30am. Fate intervened, but the "What ifs" and guilt – and the real trauma of trying to get out of Manhattan that day – led to the creation of his hauntingly beautiful and hopeful original song "Stronger". "Stronger" is used as a musical and visual thread throughout the documentary.

This original song for 9/11 is dedicated to the countless heroes in America who have made all of us “Stronger.” To all of the families whose lives were tragically altered by the events of September 11, 2001: Your loss is felt by all of us. We must never forget. The loss of lives, the shock and horror have made a forever impression in my mind. This indelible impression and this message I share with you, in this strong, “Stronger.” I was supposed to be there. “Stronger” is an original, emotional ballad I wrote in Manhattan and recorded in New Jersey (across the Hudson River) a couple of weeks after 9/11 as a way to emotionally deal with the disaster. My meetings at the World Trade Center with Northeastern Capital (and later, Cantor Fitzgerald) were rescheduled for later that morning during a phone call from Northeastern Capital just the night before. We lived across from the WTC, and we were exiting the subway at 33rd street (near my office) when the first plane hit. One of my clients, Cantor Fitzgerald lost all 658 employees that were there the day of the disaster. Writing and recording this song helped me find the strength to get through it. I hope it gives all of the survivors and their families strength also. This is dedicated to all Americans who are true Patriots. We’re all in this together. “Stronger” was remastered during the week of the 19th Anniversary of the Twin Towers Disaster, on September 10th 2020. Nth Degree Group created a new video to commemorate the anniversary, in order to include it in my new “Marc Ison” Channel.

Watch Now
"I know that this documentary may be a difficult watch for some.  But if you didn't live in Manhattan on 9/11, you may not know the extent of the trauma that was inflicted on the "occupants" of NYC that day.  Even trying to get out of the city was traumatic. I tried to use the song as a thread throughout the documentary, not only as a storytelling device, but also as an aspect of hope...The song is hopeful.  So I hope that the song helps."
- Marc Ison
Share on Facebook
Share on Twitter

No comments to show.